Some use walls to keep people out. Others use them to invite people in.

“Inclusion rather than exclusion is the driving force behind the festival,” says MB6: Street Art Curator Vestalia Chilton of ATTOLLO.  Responsible for a myriad of murals in the medina created for the Marrakesh Biennale Edition 6, Chilton said the global collaboration began at the Marrakech TED Talks a year ago.  There she asked Vanessa Branson, founder of the Marrakech Biennale in 2004,  if she’d be interested in adding street art to the event ranked in the top 20 Biennales worldwide.  The answer was yes, launching another first for Morocco.

The 6th edition Marrakech Biennale–Not New Now– running until May 8 with free admission  celebrates the city’s artistic and cultural leadership in building bridges between the Islamic world, the Pan-African diaspora and the West.   The event is overseen by Reem Fada, Curator for the Guggenheim Abu Dhabi, who believes the multi-disciplinarian approach connects local and international audiences to “new ideas and artistic visions from Morocco and abroad.”

On a press tour led by Vestalia and a lunch interview at Kosybar following (video below), I saw the gifts left to the city and learned more about the genre.

A study in contrasts, the works convey not only innovation and change but also universal, timeless values.  They juxtapose human diversity with commonalities.

“Street art has no ego. If people like it, it stays. If not, if goes. One mural is already gone,”Chilton explained.

Once  graffiti artists on the run, painting where they weren’t allowed, this new generation of contemporary urban artists are critically acclaimed agents of restoration rather than rebels.  The independent spirit and creativity of the underground scene which produced works accessible to the general public in urban environments has risen to become the biggest art movement since Impressionism.

The work of Alexey Luka, progressive Russian artist, can be enjoyed in the square of Café des Epices. His work have been exhibited in Moscow, Saint Petersburg, Amsterdam, Lyon, Paris, Portland, Rotterdam, and San Francisco, and Rome. Alexey is a member of the creative association ‘Artmossphere’ which organized the 1st Moscow Biennale of Street Art in 2014, supporting Russian street artists and graffiti writers. Photo by Ian Cox

Worldwide acceptance has led to commissioned  public works and inclusion in high profile galleries and art festivals.    Mainstream culture and media has created demand for the sale of  originals and multiples, which allowed street artists to break into the art world with access to galleries, museums and auction houses such as Christies and Sotheby’s.

Morocco’s Renaissance Man and the Biennale’s Native Son, Kalamour, has been passionate since childhood about drawing, photography, painting, and music. His paintings and sculptures have been exhibited in Canada and his home country. Also an award-winning video artist, Kalamour’s releases have been featured at festivals in Morocco and Portugal.

British born artist Lucy McLauchlan (below) has work in galleries and museums and on multi-story buildings throughout Europe, gigantic billboards in China, on walls outside Moscow’s Red Square, and on New York subway tunnels. She deeply respects nature and uses etches of leaves and other elements of her environment in her paintings.

Just outside the gate of Dar El Bacha is the work of the most famous participant in the project, MadC. Despite being booked five years out, Claudia Walde enthusiastically joined the Marrakesh project and created a fan frenzy on social media. Her mural was created with seventy cans of colors. Born in Bautzen, GDR and currently based in Germany, she holds degrees in Graphic Design from the University of Art and Design, Halle, and Central Saint Martins College, London. Her two books on sticker art and street fonts published in 2007 and 2011 are praised for their anthropological insight into the graffiti art movement. Her name, derived from her childhood nickname, “Crazy Claudia” encourages all to live their creative dreams.

RUN, Italian-born Giacomo Bufarini, is a beloved muralist of international street art. His Marrakesh mural is outside Palace Bahia. A lover of travel, the London resident’s epic-sized murals distinguished by detail and complexity, colorful faces and interlocking hands, stretch from here to China and attest to his playfulness and commitment to communication. His characters speak languages of diverse audiences, and while painting in Essaouira and Marrakesh, the artist impressed Moroccans with his willingness to take time for friendly chats. His measure of success? He says if a child likes his work, he is happy.

One of the most dramatic moments of the tour was turning a corner off frenetic Mohammed V into an alley car park and seeing the works of LX.ONE and Remi Rough canopied above.

In one week eleven painters completed the MB6 Street Art exhibition, but their contribution to the city and the world that enjoys it will be appreciated long after.  Below Vestalia, joined by a member of her team, Elena Ivanova,  speaks warmly of Moroccan hospitality, kindness, and the human spirit inherent in this city and this global collaboration. 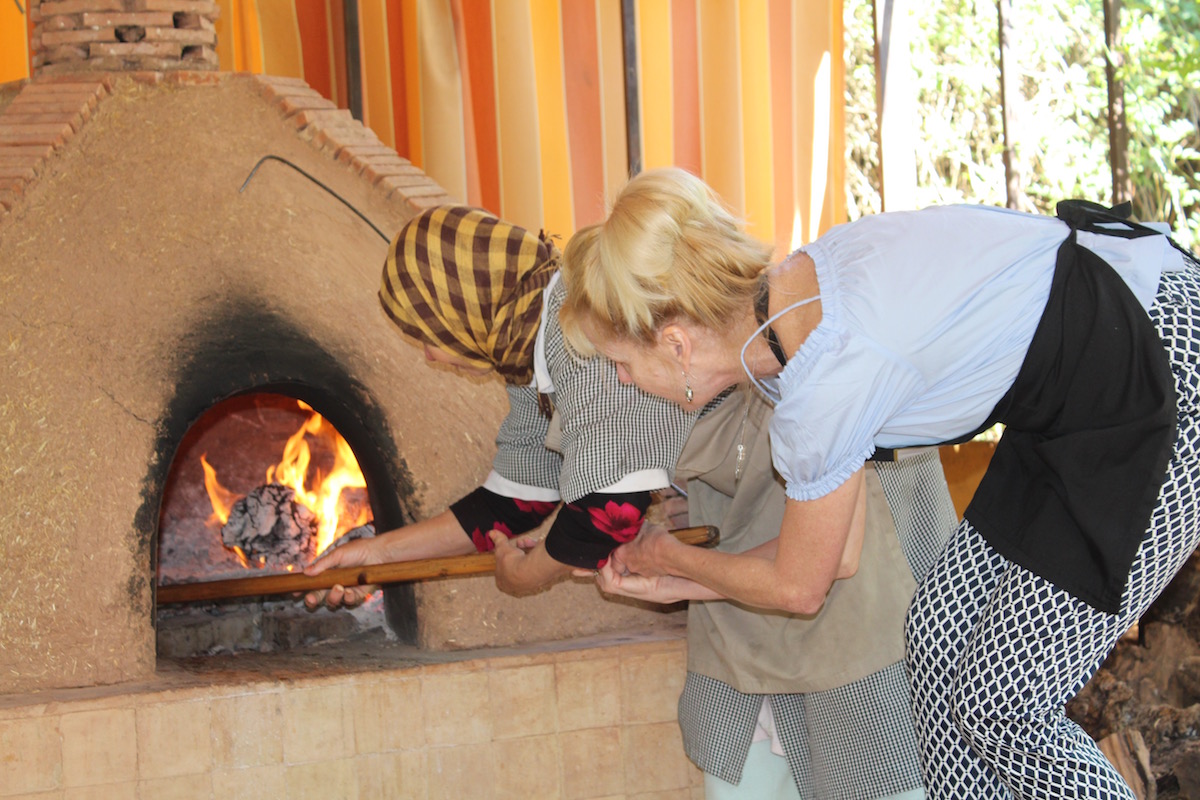 Must Do in Marrakech: La Maison Arabe Cooking Class

3 thoughts on “Gallery in the Sky: MB6 Street Art in Marrakesh”