Yesterday I was ambushed by monkeys, then drenched by a waterfall.

The first incident felt like being on the set of Scarface as Tony Montana’s compound was seized by Sosa’s drug cartel. What followed was like playing opposite Harrison Ford in yet another Indiana Jones movie filmed in Morocco.

Ok, maybe not that dramatic, but life here is sometimes like the movies–  a mix of realism, magic (like the sandstorm that blew up outside my apartment as I wrote this as if on cue), and moments of Monty Python. Yesterday’s road trip was to Ozoud Falls, located150 kilometers from Marrakech, in the province of Azilal.  We began at 8 AM in a van arranged by Ismail Amzilo of Morocco Desert Adventures.   Our journey was cathartic providing fright, wonder, and laughter. It quenched thirst for adventure, beauty and relationship–especially because it was shared with a community of coworkers that functions like family when living abroad. Together we weathered the long ride (3 hours each way fraught with bathroom stops behind bushes and in some scary Turkish toilets).  Still we pressed past queasy stomachs, even rain that prevented the full hike we’d planned, but in the end were rewarded with much fun including a couple of surprises.

So about those monkeys…while seated on a café terrace watching the waterfalls and waiting for tajines,

Monkey #1 climbed out of the rocks onto the bamboo ledge that wound around our table. His eyes were fixed and unreadable as he slinked toward us like a model on a New York runway while we, the paparazzi, breathlessly snapped photos. With one swift leap, he dove into trees behind and below our table and was gone.

We all sat down again, thrilled with the close encounter. Emily was sitting beside me, her back leaned against the bamboo where the monkey had disappeared. Suddenly, with the stealth, stoicism, and surprise of the assassins who scaled the walls surrounding Tony Montana’s mansion, the monkey’s paws, then terrifying grin appeared beside Emily’s ear. At our screams (and my unfortunate “Oh Shit!”) he again vanished. Emily moved to the other side of the table, and I scooted close to her, while Bethany and Jon said they weren’t afraid and would keep watch.

While we finished dessert, a large female monkey– Big Mama– appeared on the ledge at the other end of the table. She stared, unblinking, at us, then began her strut down the runway.

a quick leap to the right…and she POUNCED on the middle of the table. Brazenly grabbing the breadbasket, she took off, rebuked by Jon who had seen his 3rd grade teacher bitten on the butt by a monkey at school. That poor woman had rabies shots and stitches.

Thankfully, the ones we saw on the trail the rest of the day were smaller and not aggressive. And though Jon’s story (and another he told in the van about an alligator who bit an elephant’s nose) had us worried about the man we saw with a monkey perched on his shoulder, I hoped his turban would protect his ear should the creature take a nip.

We headed down to the platform where we posed, snapped poses, and were posed with.

And then our descent began down what seemed to be hundreds of steps–a great workout considering a storm looming prevented our mountain climbing.

At the bottom were more photo shoots before we boarded a Moroccan-style gondola for our ride into the cascades.

Back on the van we heard a story from one of our tiny troopers about giants wearing flip flops.  The waterfalls made us all feel small again with their Jurassic Park size and spray.  As our guide rowed us into them, I’m not sure I’ve laughed that hard since carnival rides with my sister at the Wilson County fair or Opryland’s Grizzly River Rampage. And there were two more surprises.  Who says life isn’t ponies and rainbows?  Yesterday we enjoyed both.

Morocco Desert Adventures is on Facebook.  For tour information, Ismail can be contacted at info@moroccodesertadventures.com. 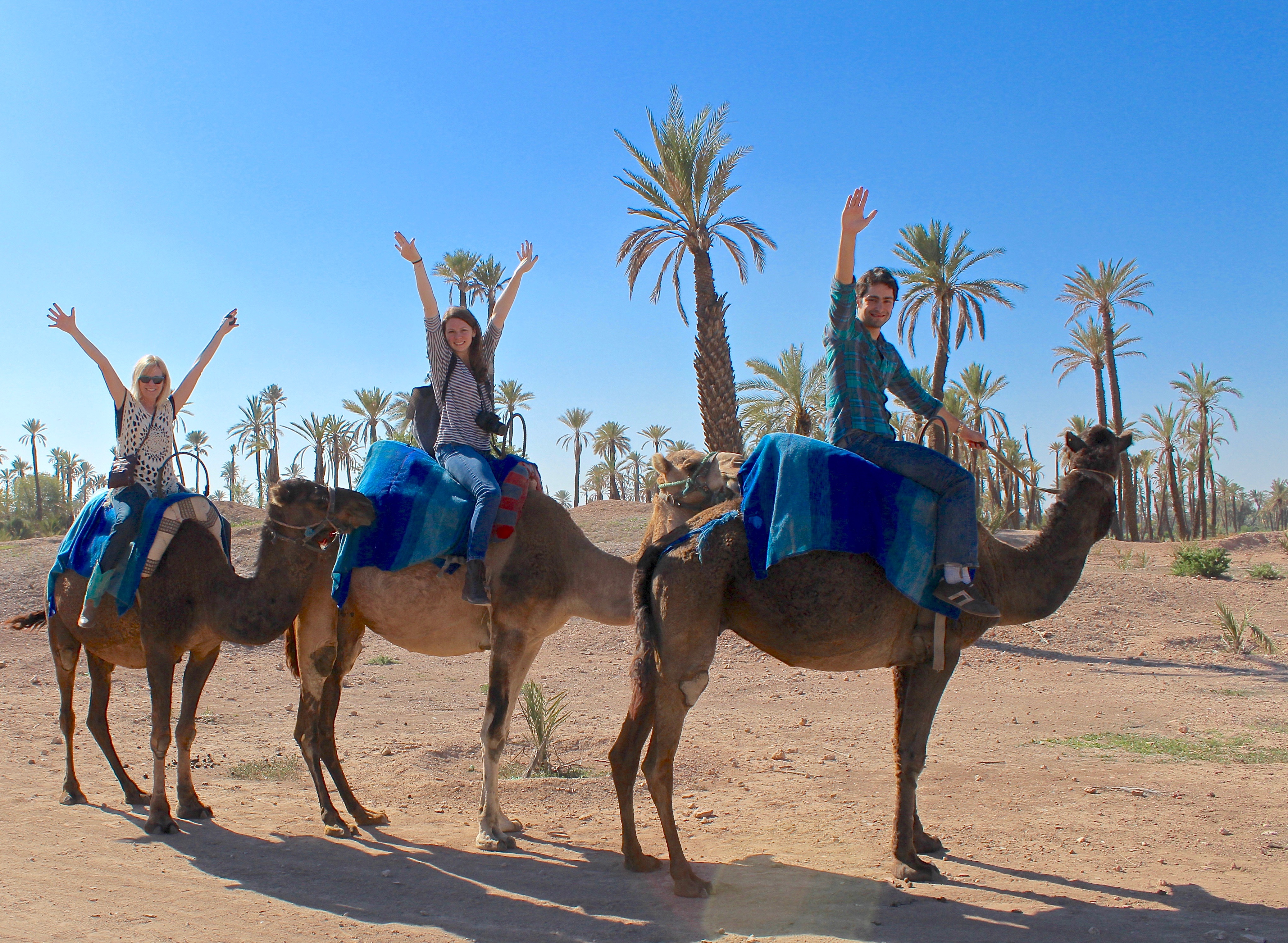 Pepe Nero: A Place to Celebrate

16 thoughts on “Living Large (and Small) at Ouzoud Falls”